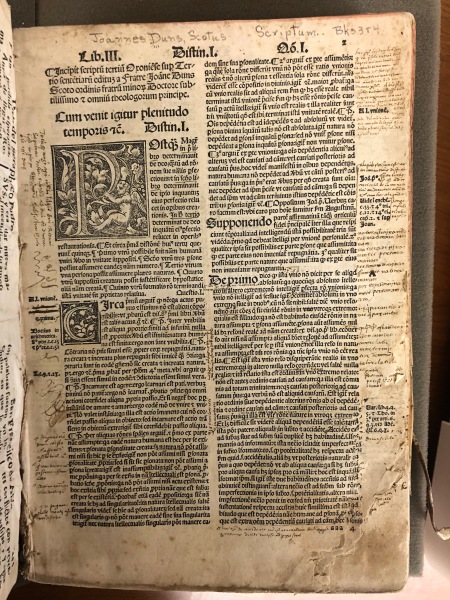 The philosopher and theologian John Duns Scotus was a great influence on the Franciscan intellectual tradition, and it shows in the copies of his works that were once property of the Colegio de Santa Cruz de Tlatelolco. The school was founded in 1533 by Franciscans to prepare the children of indigenous elites for priesthood. Though it produced no priests in the 16th century, its students were trained in various subjects—such as rhetoric and philosophy—and were trilingual, being able to read and write in Nahuatl, Spanish, and Latin.

One book contains several annotations in Latin, made in a careful hand, suggesting a reader who was well educated. The annotations run up and down the outer margins, and are even found in the space between the two columns of printed text.

Another Scotus book carries a different kind of inscription, written in a less practiced hand. It reads: “no entiendo la letra por eso no se” (I do not understand these letters, that is why I don’t know). The book’s text is in Latin and was printed in the first part of the 16th century. The Roman typeface is legible to those who know the Latin alphabet, though it features many abbreviations that were in common use in printed books of the early 16th century. It could be that the user of this book was illiterate in Latin, confused by the letterforms of this particular typeface, or unfamiliar with the archaic abbreviations.

A few pages later we find another inscription which appears to be by the same person: “indulgencia a quien leyere esta hoja por sixto 30” ([an] indulgence to whoever reads this leaf by six 30). It seems the reader who cannot understand the letters is announcing that an award awaits whoever can.

Both of these books are bound into a single volume. There is an interesting contrast between the first heavily annotated book–clearly the work of a very eager reader–and the later one, whose user professed their ignorance. When might these works have been brought together?

There is internal evidence to suggest they were bound at the Convento de Santiago Tlatelolco sometime in the mid-18th century. Discarded sheets from another book—Compendio de la vida marabillosa del gloriosissimo Padre S. Francisco de Assis—make up the endpapers and are attached to both from and back covers.[1] This book on the life of Saint Francis was produced by the famed printer Joseph Bernardo de Hogal in Mexico City and it makes sense for it to have been at a Franciscan convent and the site of a famous school. Because Hogal’s book is from 1735, we know that the volume of Duns Scotus books were rebound or repaired at some point after that—over 200 years after the texts within were first published. It’s possible, then, that the annotations were created over a period at least as long, offering some insight not only into how readers engaged with the text but with the language and objects which carried those meanings across time.

[1] Interestingly, a second volume—also made up of multiple individual works bound together after publication—has printed waste endpapers from the exact some 1735 biography of Saint Francis by Hogal. As of this writing, a third volume with print waste from the same edition of this biography has been located.

Good morning! It really feels like winter is here! These images are of Calaveras Big Trees State Park - from our awesome online catalog. #snowscenes #archives #libraries #specialcollections #winter
Vehicles have come a long way! We saw that today on @scifri Ralph Nader discusses his revolutionary investigation into car safety called "Unsafe at Any Speed" on its 55th anniversary! We found these Images from 1905. #automobiles #cars #carsafety #libraries #specialcollections
#HeadlinesOfHistory is upon us once again! This December 2, 1788 British newspaper has it all: the French Revolution (just 5 months away), the illness of King George III, the American Revolution which dealt "a fatal blow' to France's aristocracy, as well as John Adams being "unpopular" for his "The Defense of the Constitution of the United States of America" - in which he argues the importance of the separation of powers amongst the different branches!
The Homestead Act of 1862 allowed any person to claim 160 acres of land for free.
#OnThisDay in 1923 #HollywoodLegend and prolific filmmaker Cecil B. DeMille's "The Ten Commandmants" was released. Known for his "cast of thousands," #CecilBDeMille made 70 movies - these stills are from "The Buccaneer" - found in our awesome digital catalog.
We thought it would be fun to look inside Frank Sinatra's Beverly Hills' residence taken in November 1956. The architect was  Paul R. Williams and he was given free license to create Sinatra's Trousdale Estates' home. Images from our wonderful and fabulous online picture catalog here: